Wild: From Lost to Found on the Pacific Crest Trail
by Cheryl Strayed 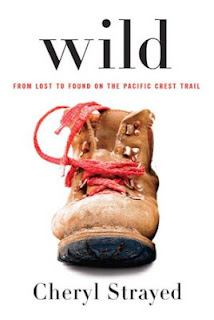 This was my beach read on my Cape Cod vacation this month, and I really enjoyed it.   Here is what Amazon has to say:

“A powerful, blazingly honest memoir: the story of an eleven-hundred-mile solo hike that broke down a young woman reeling from catastrophe—and built her back up again. At twenty-two, Cheryl Strayed thought she had lost everything. In the wake of her mother’s death, her family scattered and her own marriage was soon destroyed. Four years later, with nothing more to lose, she made the most impulsive decision of her life: to hike the Pacific Crest Trail from the Mojave Desert through California and Oregon to Washington State—and to do it alone. She had no experience as a long-distance hiker, and the trail was little more than “an idea, vague and outlandish and full of promise.” But it was a promise of piecing back together a life that had come undone.  Strayed faces down rattlesnakes and black bears, intense heat and record snowfalls, and both the beauty and loneliness of the trail. Told with great suspense and style, sparkling with warmth and humor, Wild vividly captures the terrors and pleasures of one young woman forging ahead against all odds on a journey that maddened, strengthened, and ultimately healed her.”

Don’t be put off by the hiking aspect; while of course that is a major part of the story, her memoir is about much more than that.  Kept me glued to the page!
Kid book
The Dot
by Peter Reynolds 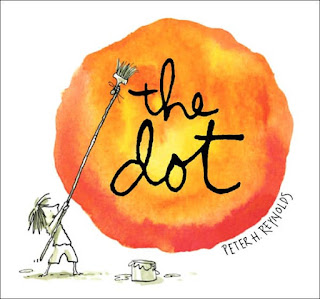 The author/illustrator of this book is local; he owns the great Blue Bunny bookstore in Dedham.  Both of my kids love this book, which is the story of a girl named Vashti, who is discouraged because she thinks she can’t draw, and what happens when her art teacher encourages her.  Great illustrations and story!
About the Author
Katie Edwards lives in Needham with her wife and two children, ages 13 and 3.   She has a Master’s Degree in Library Science, but has been a stay at home mom for many years, so she is happy to have an outlet to share good books with others.  She loves to read [obviously], travel, try new restaurants, and gab with her friends.  Luckily she is in a book group where she can simultaneously eat and talk to friends about books.
Share